I am a director, choreographer, and performer who loves to tell timeless stories through music and dance.

I believe in using the best of theatre’s past to inform its future.

I strive to make dance an integral part of musical theatre storytelling.

I create inclusive, equitable, and safe rehearsal spaces with a focus on community building, collaboration, and clear communication.

I know that my continued work as a performer enriches my work as a creator and collaborator.

In NYC, Avital choreographed the regional premiere of The Queen Bees at Queens Theatre in the Park, the world premiere of The Rat Pack Undead, and a revival of Rags at The Connelly Theatre. Alongside composer Alden Terry, she created Ephemera,  an evening of site-specific dance theatre with a completely original score. Her concert dance choreography has been seen at the JCE Jazz Dance Project, Steps on Broadway, Dance New Amsterdam, Green Space Studios, and the 2016 Choreography Canvas.

Avital was honored to serve as associate choreographer to Lorin Latarro on Prospect Theater Company’s production of Jasper in Deadland. She was the original associate director of Theatreworks USA’s tour Teacher From The Black Lagoon, and the assistant director/choreographer of Nymph Errant, also with Prospect. Avital had the privilege of observing choreographer Randy Skinner on the Encores! City Center production of Gentlemen Prefer Blondes.

Avital is a fierce advocate for new musical theatre development. She created and currently serves as the director of The Choreography Lab, now in its ninth season at The New York Theatre Barn. The lab works to elevate and expand the use of dance in musical theatre, and is the only curated choreography platform where choreographers and writers collaborate to develop movement for new musicals during incubation.

In 2018, Avital launched a new company, Combustion Collective.  Combustion Collective is an interdisciplinary theater company with a focus on HOW we as artists come together to create new work.  The Collective’s first official production, The Floorshow, premiered in September of 2019 at Theatre 71 on the UWS. In 2020, The Collective began development on their second project, Tonight For The Tapir. The company released a draft version of the project as an audio play in December 2020 and plans to produce a live version in the future.

Avital has performed throughout the country, most notably as Ms. Shields on the national tour of A Christmas Story. In 2016, Avital made her Off-Broadway debut in the revival of the lost Marx Brothers musical I’ll Say She Is. Select regional performance credits include productions of Backwards in High Heels, White Christmas (Westchester Broadway Theatre), 42nd Street, Cabaret, The Drowsy Chaperone (Surflight Theatre), and No No Nanette (Reagle Music Theatre).

When Avital is not directing, choreographing, performing, or producing, you can find her teaching at a variety of wonderful NYC organizations. She currently teaches Jazz, Tap, and Musical Theatre classes at Mark Morris Dance Center, Broadway Dance Center, and at schools all over NYC through New York City Center’s Education Department, and Together in Dance. Avital recently completed the basic and beginner levels of the Nan Giordano Certification Program and incorporates elements of the Giordano Jazz dance technique into her Jazz and theatre dance classes.

In her free time, Avital enjoys spending time with her husband and cat in Brooklyn, trying out new recipes (check them out on insta: #Avitalmakeshealthymeals), and posting on her blog, The Strategic Artist.

To receive occasional updates, sign up for my newsletter. 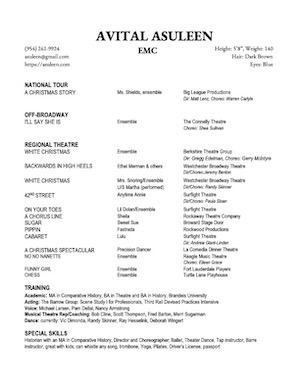 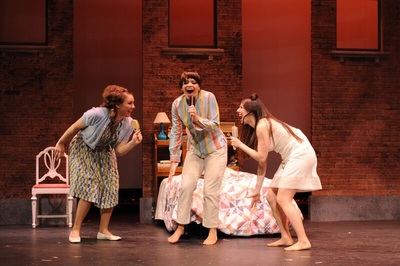 ” [Huge Kudos] for choreographer Avital Asuleen, who managed to create moves authentic to the time period while original too.”
— Georgina Young-Ellis, Queens Gazette

“Miss Shields (the dynamic Avital Asuleen), as a chanteuse in red satin, belting ‘You’ll Shoot Your Eye Out.’ She’s accompanied by a chorus of kids in tuxedos and sequined chemises, like the cast of ‘Anything Goes.’ Their jazzy joy is infectious”
— Judith Newmark, St. Louis Today